[UPDATED] 11:11 wishers finally got what they wished for as TAEYEON comes on tour in Asia. 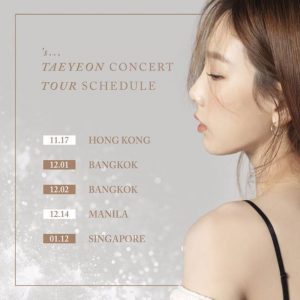 After her concert tour in Seoul, South Korea on October 20-21, TAEYEON will continue for an Asian tour for her (‘s Concert Tour) in Hong Kong, Bangkok, Manila and Singapore. [NEW] On November 13, PULP Live World just released the ticket prices and stage layout for Taeyeon’s Concert at the New Frontier Theater (formerly known as KIA Theater) this coming December 14. So far, TAEYEON as an artist has released a studio album, 4 EP’s and 31 singles with 2 concerts including Butterfly Kiss (2016) and Persona (2017) and numerous showcase tours. Watch out for further updates about Taeyeon and her concerts here on HallyuLife.

LOOK: Official nominees for our own 2021 HallyuLife Awards!

The first-ever HallyuLife Awards is now commencing - with nominees in K-pop category! It was originally scheduled to be released on March 9, her birthday. SONE's get ready for a HAPPY comeback with TAEYEON! Taeyeon sends heart-warming message to self with ‘Dear Me’

The MV just came out!